Mahanum received special recognition at her PTD Alumni Dinner on December 15, 2012 and was awarded a significant contribution for her orphange work todate. Keep it up Mahanum

Video Credits: A Zabanah Production
Posted by Unknown at 5:45 PM No comments:

Season's Greetings To All

It's the end of the year again (and the world has not ended as yet). For me and Ah Kat, 2012 has passed by in a flash. May we wish you and your family a very Merry Xmas and Happy New Year. If you have to travel, beware of the AES system....if you have to eat, please be moderate. When you pray, please remember the rest of us as well as the less fortunate ones in this world. 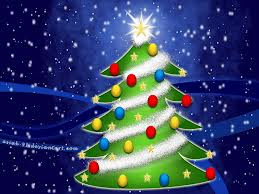 We hope to see you all soon. Watch out for news on our next karaoke session...and maybe bowling as well....meantime our best wishes to all.

Ah Yee and Ah Kat
Posted by Unknown at 10:36 PM No comments: 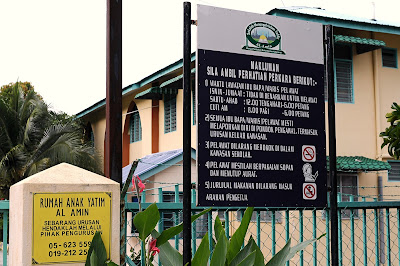 Despite ominous rains and thunderstorms, we made our annual trip to Mahanum’s orphanage in Chenderong Balai on Sunday, 4th November 2012. 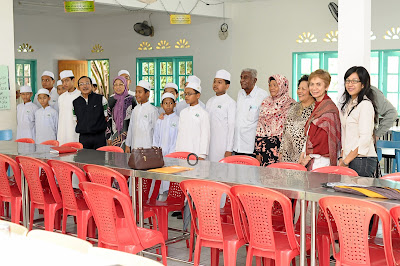 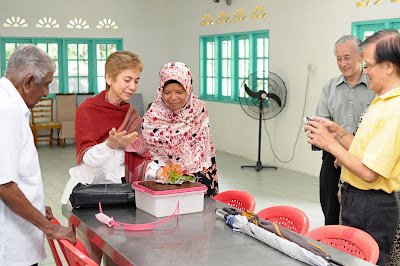 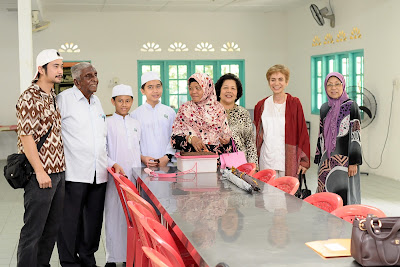 Mahanum briefed the group about her activities and her plans for the future. Before lunch we celebrated Mahanum’s (belated) birthday (which was on 23 October). After lunch we toured the premises and were treated to a presentation by students of SMITA, Sekolah Menengah Tahfiz Al-Amin. 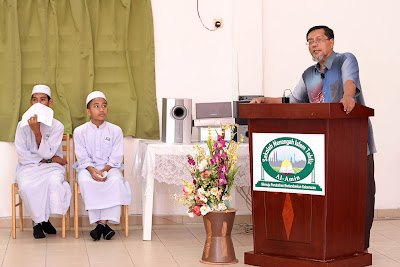 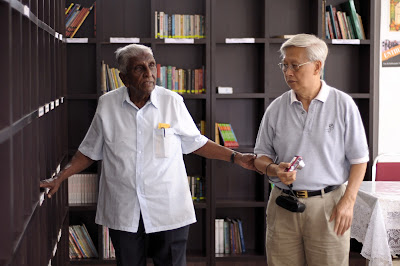 Several donations were made to Mahanum (by Dato’ Seri Dr Selvamany, Tan Sri Nuraizah Hamid, Dato’ Salleh Yeop and the ASI 66/67 group) to encourage her to carry on this noble work. 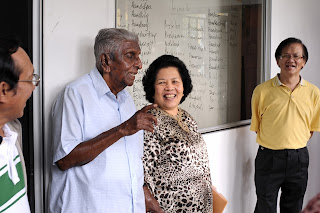 We departed after the rains stopped.

Sek Yee & Khadijah
Posted by Unknown at 10:58 AM No comments:

The SS19 Carnival which took place on 7th October in SS 19/1 in pictures (more to upload) and a summary of the event for your info :- 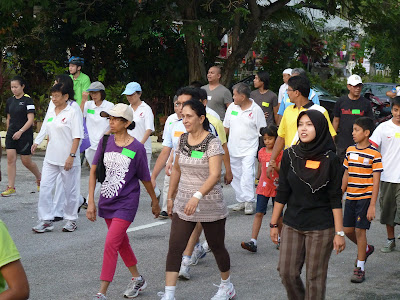 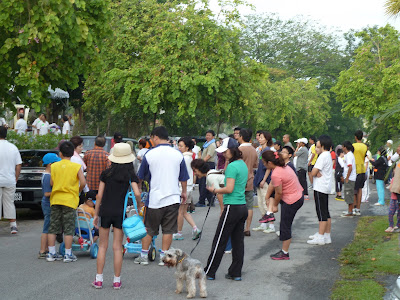 1. Our members took part in the "Walk for Health" and we won a prize for the group with the largest number of participants, again. Terry went up to receive the hamper on behalf of Keranji Chi Dynamics. 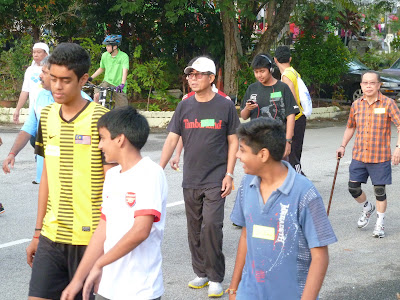 2. Aunty Ng Koon Yeng won again, hands down, in the "Oldest Lady Participant" at 79. By the way, she is undergoing a surgery on Monday, 29 Oct at Island Hospital in Penang. Let us pray for quick recovery for our favourite aunty. I will keep you posted on her progress. 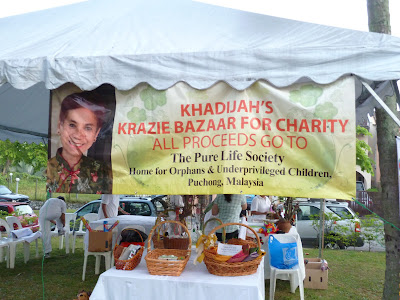 ﻿
﻿3. Many hands helped in making our stall, which my husband named "Khadijah's Krazie Bazaar" a success. (He said he had wanted to place the adjective before the noun but decided not to take the risk...life is precious). BTW we netted RM1500 from the sale of donated items as well as cash donations. Here my husband and I would like to record our gratitude to those who donated items for sale as well as those who contributed their time and expertise in preparing and displaying, and of course selling the products. Without them it would not have been the same. N.B. Items that were not sold have been re-donated to the Salvation Army Old Folks Home in Section 12, Petaling Jaya. They have a stall at the week-end flea market at the Amcorp Mall. 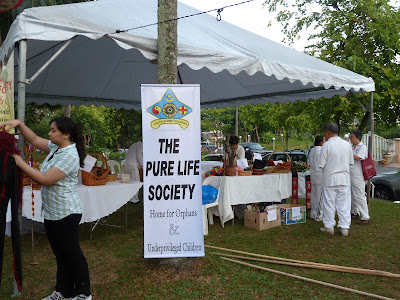 ﻿﻿
﻿﻿4. We are arranging a visit to The Pure Life Society some time next week to hand the proceeds to Mother Mangalam. Please let me know if you would like to come along with us. This may be a good opportunity to get to know them and to find out in what we can offer our services. 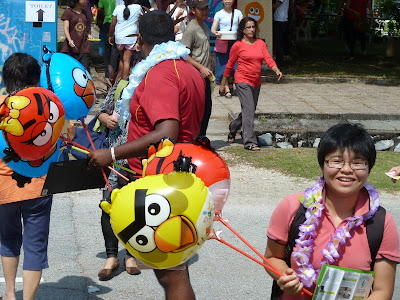 5. The Spastic Children Association of Selangor & the Federal Territory also received a lot of support from the visitors to the Carnival. Each contributor of RM20 received an Angry Bird Balloon and I remember there were a lot of people walking around with these ballons during the carnival.


6. The Lioness Club of Subang Jaya did a great job, netting about RM800 selling clothings contributed by well-wishers. 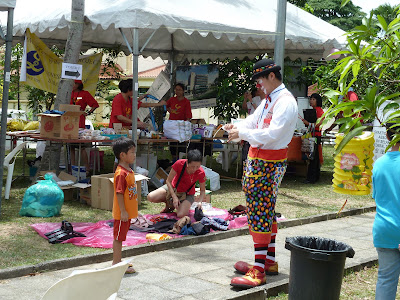 7. The Organizers also invited a clown to keep the children happy. He fashioned animal shapes, flowers and swords from balloons and distributed them to children. 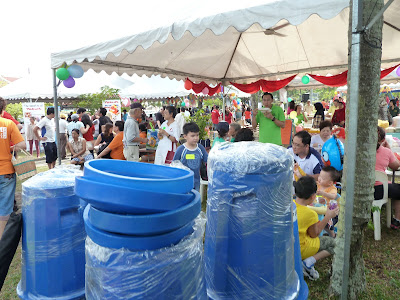 8. MPSJ did a demo on home composting. 20 compost bins were distributed free to those who wish to start their own composting program at home. MPSJ officers will paying them a visit in the near future to monitor their progress. The Fire Department also did a demo on how to control small fires before they can cause damage to life and property. 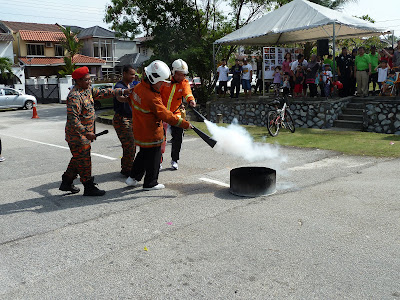 9. There was a childrens' art program which was run by Real Kids. Judging by the number who participated it was a huge success. The Vibrante Music School showcased their students, both adults and children, who entertained us to some familiar classical numbers on the violin and cello.


10. Animal Care led by Dr Chan Kah Yein was also there in full force to create awareness...animals are our friends...therefore we should look into their welfare too.

11. There were several commercial enterprises as well as small timers and part-timers who showed us their ware that day and promoted their products.


12. We went retro that day as we were entertained to live music from our childhood days till today. They lent a true carnival mood to the occasion.


13. Two ADUNS graced the occasion and the Association received donations from them to help cover the cost of organizing the Carnival.


14. Three blind reflexologists were also there to provide foot massage. At RM10 per 10 mins massage...they went home happy, as did their clients, I am sure.


15. And of course food, glorious food! We had food galore that day and both seller and buyer had a good deal. The quality as well as quantity were way above that of the previous Carnival. The stalls were better laid out and there was plenty of space to sit around to enjoy the food and the atmosphere. Take-away business was very good too. However I noted that the food biz created plenty of garbage which is not great for the environment. Perhaps next year we should be bringing our own tiffin carriers, shopping bags and even bowls and forks and spoons in order to reduce the use of disposables while at the same time initiating a re-think about our current "pakai-buang" culture. 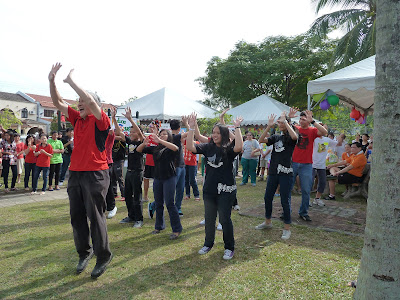 16. And the icing on the cake was the Opah Gangnam Style demo after the opening ceremony. A group of young ones from the community performed to perfection even though they only had a total of 2 practice sessions before the Carnival. But then they had the expert guidance from an import from the SS 2 RA, Uncle Tan Hau Kiang aka Tan Sri, who teaches line dancing as well as ballroom dancing. I heard that after the performance he was approached by several parties (ladies, of course) who were looking for a dance sifu.


17. We had such a good time that we hope the Carnival will continue to be a feature in our neighbourhood activities. However we realise that a lot of hard work was put in by a limited few. However, despite the short handedness, it was a great event and we kowtow to all those individuals who lent a hand (or two). Perhaps next year we should come forward to offer our services as I was told we need to infuse new blood into the committee to keep it going. This is our kampung, we live here, we are its keepers.

Khadijah
Posted by Unknown at 6:53 PM No comments: