Just click on the 'play'  button (hope you know where it is!) and watch the slideshow! A simple show of what the digital age can do to re-connect  'aged' folks!

Posted by Unknown at 2:20 PM No comments: 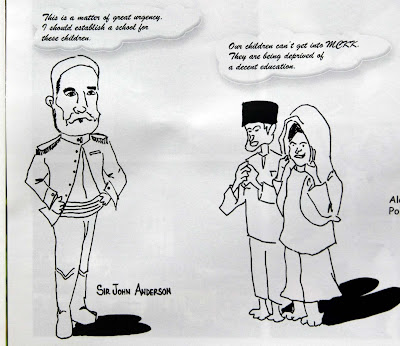 The cartoon shows parents, whose children were not accepted into the then newly-established elite Malay College Kuala Kangsar (MCKK), pleading with the British authorities to take some measure to ensure their children received a decent education.
So strong must have been the pressure from parents, especially the Malay parents, that the British authorities decided to establish a new English school in Ipoh -- Anderson School.

"Seeking Inspiration from a Greek Hero"

The cartoon shows parents, whose children were not accepted into the then newly-established elite Malay College Kuala Kangsar (MCKK), pleading with the British authorities to take some measure to ensure their children received a decent education.

So strong must have been the pressure from parents, especially the Malay parents, that the British authorities decided to establish a new English school in Ipoh -- Anderson School.

Named after Sir John Anderson, the governor and commander-in-chief of the Straits Settlement, high commissioner for the Federated Malay States and consul-general for British North Borneo, Brunei and Sarawak, the school was officially opened on Feb 6, 1909.

"There were the Anglo Chinese School (established in 1895) and the Methodist Girls School (1897) but it is claimed that due to religious concerns, Malay parents refused to send their children to these missionary schools. They wanted to send their kids to MCKK but enrolment there was limited.

"So having considered the sentiments of the Malay parents of that time, the British Administration in Malaya incepted the Anderson School Ipoh just four years after the establishment of MCKK. From then onwards there was no turning back... charting its course towards excellence in every field," said Anderson principal Muhammad Nawawi Yaakob.

Lt-Col J. H. Tyte, a senior assistant at the Victoria Institution, was appointed Anderson School's first headmaster. The school, which was originally housed in a stately building on Douglas Street (now Jalan Panglima Bukit Gantang) before moving to its present premises at Jalan Hospital, initially had seven classrooms with an enrolment of 52 students.

According to Nawawi, the school's motto was coined by its fourth principal C.F.C. Ayre, who happened to be the longest-serving head of the institution from 1922 to 1936.

In the special Centennial Anniversary: Anderson School Ipoh Malaysia coffee-table book, a passage mentions that "... Ayre, who hailed from Malacca High School adopted from Tennyson's poem called Ulysses, the school motto, 'To Strive, To Seek, To Find and Not To Yield'."

And, owing to the century-old contributions of its principals, teachers and support staff in producing many luminaries, the school was declared "a premier school" by Sultan of Perak Sultan Azlan Shah during the grand centennial celebrations in February last year.

"We hope one day that this school will be the proud alma mater of the country's future prime minister.

"That is a great challenge but one I trust can be realised if our students keep the school's motto to their hearts," said Nawawi.

Posted by Unknown at 8:53 AM No comments:

"Look at their Mischievous Eyes!"

No Banana Leaves? Just As Good!
Our Alma Mater
Posted by Unknown at 3:29 PM No comments:

These are exclusive scenes never shown before on any TV/Movie networks! Unlikely to win any of the available 'Oscar' awards! But it is a start for all of us!
Posted by Unknown at 10:55 AM No comments:

Actually, the message engraved on the gift was extraordinary! Yes, this was the final segment of the address by our Datuk Seri N.S. Selvamany.
Posted by Unknown at 12:26 AM No comments:

On Monday 9th August,Pit Loo was admitted to the Tung Shin hospital for a 1 1/2 hours hip replacement surgery (left side).The operation was successfully done by a well known orthopedic surgeon and when we[ Hau Kiang, Wan Ahmad Kamal and Puan Azizah (WAK's Boss), myself and my boss] visited her on Tues morning 10/8, she was in good spirits and raring to get back to enjoy life. At the hospital, she showed us the parts of the hip that had been replaced with a metal piece......hence she is now a bionic lady....so don't play,play with her.She does not know what caused her hips to degenerate....maybe a fall while skiing 20 years ago or too much line dancing?

She was in pain over the past few months.Despite the discomfort in the hip area and despite having to look after her mother who has Alzheimer's disease, Pit Loo took time off to join us in several of the group's activities......this we appreciate very much.

So Pit Loo, we all wish you a speedy recovery from surgery, recuperation, and a steady progress back to enjoy life again......if your sister can go to London barely one month after her hip surgery, you can definitely make it to Mt. Kinabalu with us next year.

We presented Pit Loo with 3 copies of the famous Chinese comics series...."Old Master Q"......this is the perfect antidote to a lot of ailments....no believe? Try it someday.

Best Regards and be good,

We Welcome the Month of Ramadhan....

We wish all our Muslim 'uncles & aunties' selamat perpuasa in the coming month of Ramadhan. It is also a good time to reflect on the years gone by and also on how we have tried to bring you all up to speed with inter-connectivity avaialable to us nowadays!

We also wish Madam Chong or Patricia a speedy recovery from her recent 'hip replacement' surgery; she is now one 'hip' of a lady and is sure she will back in the swimming pool soon!

Talking about 'hip', have you heard of the 'not so hip' song 'Technique'? Is the original singer Pat Boone or Harry Belafonte??

We are also left wondering why Chin Fook Leong has gone into silent mode for a while! Maybe he too is overwhelmed by the flood of new photos appearing nowadays! Which goes to say that our Chief Emailer & Cameraman "Ah Yee" has been doing a fantastic job of keeping track of events photographically!

We are also  pleased to report that WAK (and Mrs.)  made a special appearance to visit and convey their 'hippy hippy' wishes to Madam Chong; But please make special appointment if you want to see him, OK?


On 7th Aug, Eng Yee arrived from Singapore to attend a wedding as well as some TAR College matters. A group of us turned up for tea with her at the Banquet, Bangsar Village 2. It was a very memorable day as a few other "new" faces turned up....namely Neeta who rushed back from Seremban to be with us... she told me she has been missing out on a lot of past activities (she lectures in Sunway College.) Also Lee Chou Sarn took time off from a busy schedule and came along with Pit Loo. Lailatool brought along her Ah Kau who had a fine time chatting up with Hau Kiang, Merlyn, Wong Yew Sen and Wu Sor Hwa. Rashidan made it even though her car broke down in KL and Madam Qua came in smiling although a bit late. We were also happy to welcome our history teacher,Eddy Chin again.This time around, Eddy demonstrated what "deep abdominal singing " is......we would definitely need more lessons on this,Eddy.
The tea and fish market chatter ended about 6.30pm. Eng Yee treated the group today......many thanks Eng Yee.

Story & Photos by:
Sek Yee
Posted by Unknown at 7:22 PM No comments:

The computer  workshop at Jauharah's residence attracted 11 participants (actually some to makan saja). Before the workshop started, we were treated to Johor Laksa, a spread of cakes and cookies and unlimited coffee (see what you have missed).....after the workshop, we had lunch before we said our goodbyes, be good,etc.

The workshop was quite like a fish market with Hau Kiang having to explain how to access the blog, how to comment on the blog, why this and why that and other emailing aspects...like how to reply to sender or reply to all,etc,etc,etc.Jauharah was the ever keen student in the group taking down notes on the various procedures explained.....(but I could see her eyes going around in circles)......she probably need a follow-up workshop and everyone agreed that it is a very good idea.......so Jau...during Raya?
Attached are some photos of HK explaining the intricacies of computing and the good food you have missed.....see the photo showing Noorlian eating, Gek Kim, Ah Nya and Ah Kat reaching for the food and in another photo, Sarkawi has to stand up to make sure he gets the correct stuff.
We ended the workshop at 1.30 pm with everyone fully satisfied. 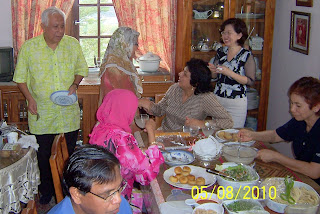 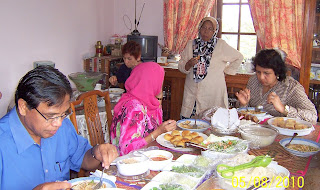 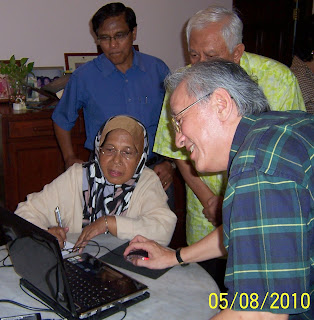 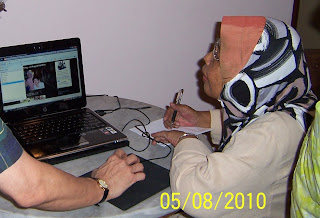 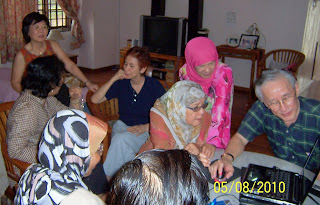 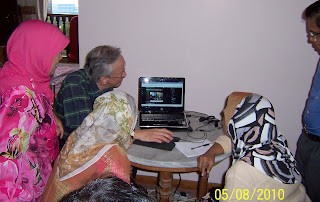 Sek Yee and Ah Kat
(Many Thanks to our Host Jauharah)
Posted by Unknown at 10:47 PM 1 comment:

On 4th Aug, a group of us (Hau Kiang, Pit Loo, Lailatool, and yours truly) had lunch with Choy Fong at the Pavilion. Choy Fong was in KL for 2 days to accompany her daughter who was presenting a business talk to some bankers in KL.Recently she accompanied her son to HK where he is working now.......she is a truly supportive mother.
Choy Fong still looks the same,same shape,same hairstyle, talks the same way and stares at you the same way.She said that she "vaguely" remembers the famous battery operated fan that she always used on her desk in class....but, but I "vividly" remember the fan..because it gave me a lot of nightmares whenever she finds the fan missing from her table (even though I was not responsible for it).
By the way, Choy Fong treated us to lunch at Madam Kwan's and later Pit Loo treated us to coffee at Old Town Cafe (which serves the best Ipoh white coffee in the world).....Many thanks Choy Fong and Pit Loo.

Story & Photos by Yeong Sek Yee
Posted by Unknown at 6:15 AM 2 comments: