Posted by Unknown at 6:57 PM No comments:

On Thaipusam day 20/1, we took an early morning drive to Serendah and visited Mohd Shafiq at his auntie's house. Of late he has been having severe pains in the right shoulder in the early morning hours. His right shoulder is noticeably bigger and inflamed. Despite the discomfort and lack of sleep,he tries to go to school as often as possible. He enjoys school and his friends.

Mohd Shafig requested for Std Five textbooks which he has not been able to obtain.We managed to buy the 12 texts that he required (and which are not available in the school) and we have decided to finance this purchase from our ASI charity fund. Whilst browsing through the new textbooks, Shafiq commented that he intends to loan these books to his friends next year and try to make some money from it.

As he was not in pain when we were there, Shafiq was in his usual jovial and cheeky self, cracking jokes and even sang some songs for us. His favourite singers are "The Spiders"......a rock group?

Attached are some photos of Shafig before surgery (with the big tumour) and post surgery (with bandages still on). Would we have survived such an ordeal?

If these photos touch your heart deeply, please help us to reach out to other such unfortunate/poor souls....hence your donation will be deeply appreciated. If you want to donate further, just call Datuk Merlyn Kasimir, Sek Yee or the Boss!

Sek Yee and Ah Kat (my boss)
Posted by Unknown at 7:25 PM No comments:

Why You Must Drink "Pu-er" Tea.....the Master Speaks

Posted by Unknown at 6:26 PM No comments:

Posted by Unknown at 6:11 PM No comments:

Posted by Unknown at 5:50 PM No comments:

Posted by Unknown at 5:39 PM No comments:

Posted by Unknown at 5:30 PM No comments:

Posted by Unknown at 5:19 PM No comments:

Posted by Unknown at 4:49 PM No comments:

Posted by Unknown at 4:43 PM No comments:

Posted by Unknown at 4:37 PM No comments:

Posted by Unknown at 4:32 PM No comments:

Posted by Unknown at 4:26 PM No comments:

Today's Thaipusam High Tea was our second gathering in 2011 and also the second one hosted by Choon Yee and Shek Seng. Our special thanks to them for the special effort to have us again in less than 2 months. Despite the short notice, the following came....Hau Kiang and Pek Hooi, Yew Sen, Sor Hwa, Sarkawi, Neeta, Ah Nya, Merlyn, Kam Loong, Hatiah, Jauhara, Rahimah and hubby, and Ah Kat and her Ah Yee. Puan Sri Raja Noora (our junior) also came along to join us.


With Chinese New Year around the corner,our gracious host Choon Yee took the trouble to prepare 3 big dishes of Yee Sang for the group to "Loh Hei" which we did together with the singing of the Anderson School song.It was most hilarious.(The School song was sung again after the group photo).

Later, Shek Seng, the Tea Master treated the group again to a special tea drinking session in his specially built tea room where Shek Seng explained to everyone why they must only drink "pu-er" tea and not other types of teas......watch this space for the video explanation.

The last group of Andersonians left the hosts' premises at about 8.15 pm.


Once again, our sincere thanks, Choon Yee and Shek Seng.

We certainly hope to do better at the next celebrations -with our singing I mean! But we got talent in Ahmad Sarkawi! And if get our Eddy Chin as Manager/Coach, we might win the next Grammy?

Posted by Unknown at 8:41 PM No comments:

The Andersonians group of 66/67 Arts started the year 2011 with a boisterous early Thaipusam lunch coupled with a celebration of Dato Seri Selvamany's 85th birthday (today) at the Old Andersonian Clubhouse, Ipoh on 16th January. Hau Kiang, Yew Sen, Choon Yee, Hatiah and myself took an early drive from KL, Poh Lam and wife came from Bukit Mertajam, Sarkawi rushed down from Penang, Hah Chye cut short his "church duties" to join us, Ramli Hassan was there also as well as our faithful ground agent, Pretam Singh and Kalwant. We were joined by 2 young Andersonians, Mikail and Raphail Sulaiman (Khadijah's nephews) who contributed the birthday cake (and birthday card as well). 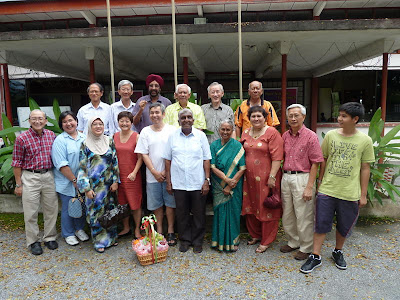 We all arrived early, had our teh tarik, practised the Anderson School song (Hau Kiang printed the lyrics), had our banana leaf lunch and then awaited for the arrival of our Uncle and Auntie Selvamany who arrived at about 1.30pm from Batu Gajah after prayers there. 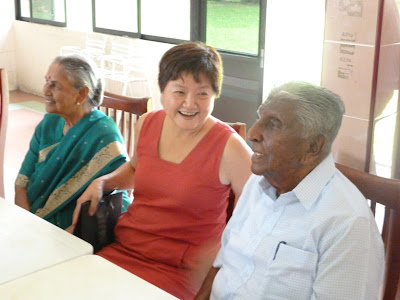 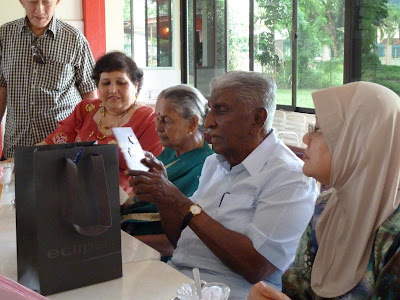 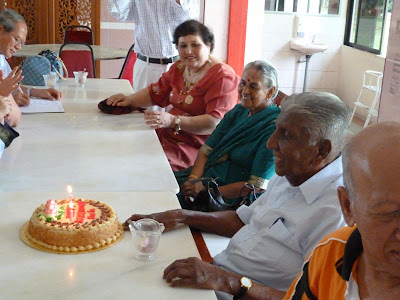 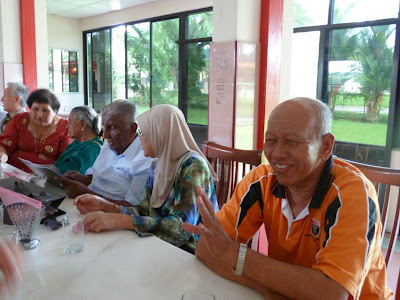 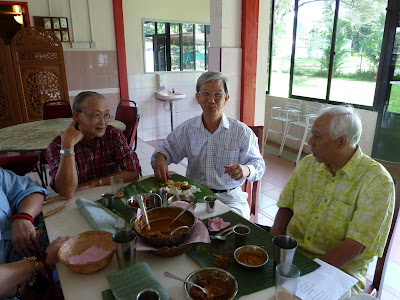 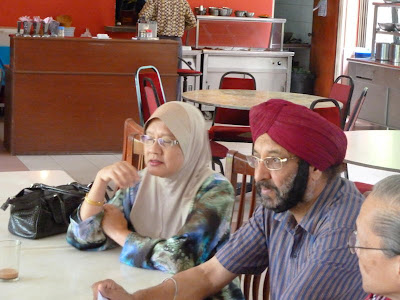 DSS and wife arrived with 3 tubs of ice cream which we promptly finished. After the usual chatter, the birthday cut and the birthday song sung, DSS gave an inspiring speech spreading his words of love and urging everyone to live harmoniously in this blessed country and be really One Malaysia and according to him the Andersonians group of 66/67 Arts is truly exemplary of this. Datin Seri Poovayee Selvamany also gave a short and very touching thank you speech.

We ended the gathering with the singing of the Anderson School song (with Sarkawi as the lead singer)....the singing was really commendable considering a lapse of 44 years......judge for yourself when you hear it......do give us some feedback.

Watch this space for the inspiring videos.

BREAKING NEWS: We hope to hear from Thoo Poh Yik real soon!
Posted by Unknown at 11:27 AM 1 comment:

"Actually, it wouldn't be charity if we give away what we don't really need. If you're hungry and have a small bun, and then somebody asks for it: if you split the bun, that's caring and sharing; but if you give him the whole bun and go hungry, that's true charity.... "

Posted by Unknown at 8:45 PM No comments: 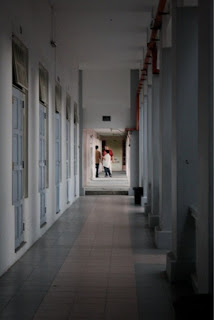 "I confess - I don't remember a thing, although we should all be having crystal-clear long term memory by now. I shall let you know once I remember anything!"

Best regards to all, 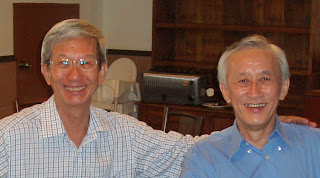 Tan Hau Kiang - "I wasn't even in Anderson School Ipoh then! I was a 'parachutist' as Fook Leong put it! When and from where? Do watch this space again for more updates! Cheers to all"
Posted by Unknown at 8:22 PM 1 comment:

According to the experts, as you age, the first thing that goes is your mid-term memory, then you start to momentarily lose your short-term memory (like what you just had for breakfast!). But, your long-term memory usually stays with you. Of course, all these are in relative terms, meaning that we all lose much of our memory 'recall' function, it's only a matter which part can be recalled better than the others. 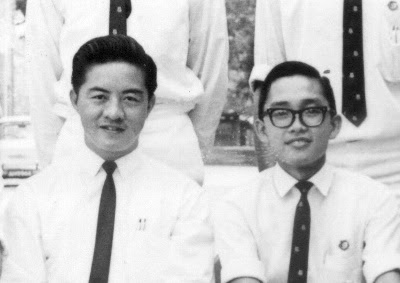 Which also means that it may depend upon how much you input along the way! If you didn't store much, then you may not have very much to recall anyway. Obviously, what you did input must have been categorized by your CPU (brain-lah) as various degrees of importance, and that's why we can remember (recall) the more significant moments, just like Sek Yee and Khad have about that day in history 45 years ago! [You may have noticed that I still call her 'Khad' instead of 'Kat' because that's what's in my long-term memory!]

As I now try to recall that day (heck, that year!), these are some of the things that are still lingering in there:


Mr Waryam Singh was our Form Teacher in Lower Six, no?

Yes, Sek Yee, Fook Leong & Poh Yik were there, and we later became the 'Gang of Four'

We were not the first year to be co-ed as there were already (albeit limited) co-ed 6th Form classes 2 years ahead of us, but it was the first time co-ed for all of us 'boys' (Actually, you ladies didn't come in on the first day but later, right? Or has my recall function gone awry already?)

For those of us who had been Andersonians all along, it was not such a 'culture shock' as we had familiarity on our side

Lecture from DSS notwithstanding, those of us who were gentlemen (ahem!) knew how to behave, while those who were not (like Sek Yee!)


If we had 1 thing in common, I think it was that we were all from relatively poor families - it was our common perception that all the 'rich' boys went to ACS or St Michael's 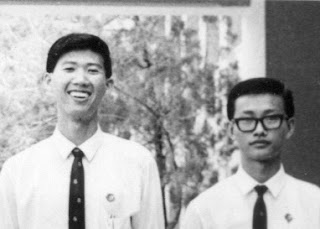 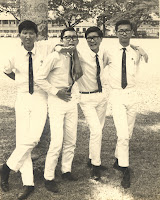 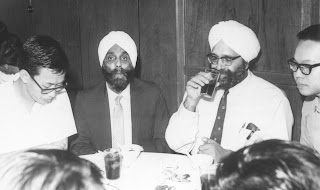 Do you know that Monday 3rd January 2011 is a very historic date? What’s so significant about it? Well, exactly 45 years ago (yes,no kidding you) it was Monday 3rd January 1966 that we all entered Lower 6 Arts 1 and Arts 2 in Anderson School, Ipoh. When we entered Lower 6 Arts, it was truly a mix of students from various schools, various races, various shapes and sizes, near and far, etc. Do you remember the events of the first day in Anderson School?
On that historic first day, how did you feel? Were you anxious or were you scared? Did your parents send you to the School and waited for you at the school gate? For the girls, how do you feel about a co-ed class with some strange looking boys? Likewise, for the boys, how do you feel sharing the class with a mixture of girls and being told that we have to behave (I believe DSS gave us a pep talk before that historic day).

If you can recall your feelings (whether good or not so good) on that first day in Anderson School, do share with the group. Please pen us your thoughts, your views, whether any boys or girls disturbed you, etc. Remember it was 45 years ago and 45 years is not going to come by our way again.

To our teachers too, your views and opinions deeply appreciated as well. Do tell us how you felt when you faced this bunch of kids on 3rd January 1966. Did you murmur to yourself OMG?

We look forward to hearing from you soon.