Our regular story teller called in not well , so no story this time!

Breaking News: The Banquet in Bangsar Village II appeared to have closed! Hmm, were we one of the factors?? So we had to re group at a new location on the ground floor!
Posted by Unknown at 11:43 PM 3 comments:

A Happy Wanderer......Loo Ming Jui (from which pre-historic era???)

On Friday 12th Nov, myself and Wan Ahmad Kamal had the opportunity to meet up with an old classmate whom we last saw 45 years ago. Through the effort of Oon Eng Sin (who was with us in Lower 6), Loo Ming Jui called me when he was about to come to KL. He is currently residing in Melbourne just like Eng Sin. After Form 5 Arts, Ming Jui went to Australia to study accountancy, then came back to Malaysia,work a few years here, married his Ipoh sweetheart (from MGS), then went back to settle down in Melbourne and made his fortune there. In his name card, he describe himself as... A Happy Wanderer. What a life!


Ming Jui's association with us (he remembers Wong Poh Lam and Chin Fook Leong as well) goes back to our early primary days in Cator Avenue and Ashby Road. As usual, WAK brought along the old photos and we spent a few hours reminiscing our primary and secondary school days before we parted company after Form 5.

This year we had the opportunity and privilege to celebrate Deepavali with Pretam and Kalwant and their children at their daughter's residence in Kajang. The party there was a riot of colours with Pretam wearing a very bright red T-shirt....his excuse was..."I have Chinese classmates coming". But none of us wore red. For those who could make it, we had a good time savoring Punjabi food and deserts.

Amongst those who came with us were Wong Yew Sen, Wu Sor Hwa, Hau Kiang, Eugene Yong (my nephew),who was one of Pretam's naughty students in 1997/1998....see how the ex-teacher "yam seng" with the ex-student....the young girl in the group photo is Eugene's girlfriend, He Xiang,

We had a good time catching up again.....many thanks to Pretam and Kalwant.....and we look forward to many more Deepavalis with you and family.


Happy Deepavali Pretam & Kalwant! And similar greetings go out to all who celebrate Deepavali this coming Friday, November 05, 2010.
And there is no better time to run this story on Pretam than now! He is another Andersonian whom we all should be proud of in the light of this great Hockey story of Anderson School Ipoh! Syabas! 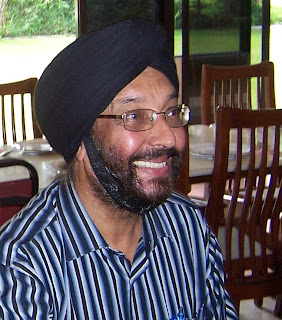 Hockey was introduced by the British administrators in Anderson School before the Second World War. The school team participated at the school, district and state levels. To generate interest in the game at school level, inter-house tournaments were organized. These tournaments formed a vital aspect of the co-curriculum schedule and helped towards the balanced development of individuals as aspired by the National Education Policy. In the 1950s and the early 1960s the game gained some popularity and some Andersonians represented the state and later on the nation in hockey. One of the most prominent Andersonians to represent Malaysia is Kamarul Ariffin, the national goalkeeper, who represented Malaysia while he was still in school. Another stalwart and most feared penalty corner specialist was A.I. Thaillanathan, who later on was instrumental in promoting the game among Andersonians.

From 1984 Anderson School saw a change in the fortune of hockey. I, an Old Andersonian was transferred to the school. I served at SMK Mahmud, Raub and had made the school the power house of hockey in West Pahang.

l was entrusted to coach the under 15 team. With my vast coaching experience, and a systematic training programme, the team soon started showing results. Anderson School under 15 hockey team emerged the District champions and went on to represent the district at the inter-district tournament at the state level. In the finals, Anderson School hockey team defeated the Batang Padang District team 6:1 to emerge as the State Champions for the first time. The then school principal En. Khalil Shah bin Jamaluddin was very supportive and was present in all our inter-school and inter-district games. He was ably assisted by En. Shamsuri Aziz. Together they decided to have a 5 Year Hockey Plan to rejuvenate hockey interest among the students

ln 1988, the Sulaiman 6 Aside hockey tournament, better known as Sulaiman Cup was organized. It was donated by the then principal, Tuan Haji Sulaiman b. Ibrahim. This tournament did wonders. Suddenly there was a revival of interest in hockey at the school level.


In the inaugural "6 Aside Sulaiman Cup" the school team emerged champion. ln their maiden participation in the USM-MILO International tournament the school under 15 team was placed third. lt was indeed an eye opener for our boys. Two players, Perry Khoo and Kajendra later represented the National Junior team.

The 1990s was the Golden Era of Anderson School Hockey. In 1991, the Anderson School hockey team became the district champion. In the inaugural tournament held in August 1991, the school team emerged champion and qualified for National Schools Hockey tournament, popularly known as "Pertandingan Hoki Juara Sekolah-Sekolah MaIaysia." The National Schools Hockey Tournament was held in Kuala Trengganu in December 1991.

At this juncture, I wish to record my appreciation to one gentleman, En. Razman, the father of one of my players, El Mokri bin Razman. He was our saviour. He went out of his way to get a State Secretariat van and driver to transport the players to Kuala Trengganu. Another van was hired. All four tyres were replaced with brand new ones. lt was also serviced, all at our cost. The driver‘s allowance and petrol was borne by us. Once the transport arrangements were sorted out, we departed for Kuala Trengganu at 3pm and arrived there at 3am the following day only to find that we could check into the hostel only after 8am. A large part of our journey along the East -West Highway was in darkness.

In 1992 Anderson School once again qualified for the National Schools Hockey Tournament by virtue of the fact that it was the State Champion. This time the tournament was organized at the Tun Razak Hockey Stadium, Kuala Lumpur. The Anderson School hockey team had arrived in Kuala Lumpur by the mail train, the cheapest means of transport and went on to win the National Schools Hockey tournament for the first time in the history  of the school. In the finals the school team beat SMK Taman Ehsan, Kepong 3 - 2. In recognition for their sacrifices and for bringing glory to the school , and state, the hockey team and officials were rewarded with an all expenses paid playing tour of Medan in June 1993.

In 1993 The National Schools Hockey tournament was held in lpoh in 1993. The school team entered the finals of the Champion Schools in great style after demolishing Johor Science School 6-0. ln the finals against SMK Faris Petra, Kota Baru the score stood at 6-1 in favour of the Andersonians. Throughout the tournament the Anderson School goalkeeper Hizal Fuad was in fantastic form. Unfortunately his brilliant hockey career came to an abrupt end when he met with an accident near Sungai Petani three years later. He died in the accident.


ln 1994, the Anderson School hockey team once again emerged as the state hockey champions and qualified as representative of the state to the National Schools hockey tournament held at the Stadium PJ. Dessoturf, Petaling Jaya. They gave their best, and emerged as champions.

The National Schools Hockey Championship in 1995 was hosted by the state of Trengganu. Anderson School became champions for the fourth time in a row.


The following National Schools Hockey Championship was hosted by Selangor at the Stadium PJ. Dessoturf, Petaling Jaya from 27th December 1996 to 2nd January 1997. Andersonians won their fifth consecutive title, a sixth unachieved by any team participating in this tournament since its inception in 1987.


In 2001 the Champion Schools MHF-MILO-NSC hockey tournament was held at the Bukit Serindlt Stadium, Malacca. As defending National champions, the Andersonians showed the mettle they were made of when they qualified for the finals. Their opponents in the final were, SMK Khir Johari, Sungai Petani. Andersonians went on to become the Nationa Schools Hockey champion for the seventh time.

The National Schools Hockey Championship was held at the Pandamaran Hockey Stadium Klang in December 2002. The final score stood at 5 : 1 and the Andersonians had steamrolled the tired Trengganu players to win their eighth National title.

Eight times National Schools Hockey champions once again had the rare opportunity of playing in front of the home crowd when Perak hosted the National Schools Hockey Tournament at the Stadium Azlan lpoh. The Andersonians showed their true form in the finals, much to the delight of the local hockey enthusiasts. In the final it was defeat for Datuk Taha, with the final score 5-0 in favour of the Andersonians. lt was Anderson School‘s  ninth National title. ,


SMK Anderson, Ipoh, having won the National Championship title nine times went into this championship tournament in full gear. Being the defending champion, the Andersonians with much exposure at district, state, and national level were well prepared physically and mentally for this grilling tournament. Under the dedicated and experienced coach Mokhtar Baharuddin bin Abdullah, a veteran of this championship and team officials Rosli Ngah and Mohd Azlan, the team arrived at the Seremban ll Hockey Stadium in high spirits.

Once the tournament commenced, the Andersonians displaying the pedigree of champions raced into the finals demolishing any pretenders to the title. In the final, their opponents, SMK Hamzah, Machang were not awed by their opponents‘ reputation. It was SMK Hamzah's Mohd Firdaus Othman who stunned the Andersonians with a field goal as early as the 5th minute. The spirited Andersonians launched relentless attacks at the Kelantan goal and erased their opponents' short-lived joy, when Mohd Nor Khairul Aziz scored a field goal in the 10th minute. ln the 19th minute, Mohd Amir Shamsukhdir broke the stalemate with a well-sent flick off a penalty corner. Once again SMK Hamzah, were leading 2-1. With minutes ticking away for the half time breather, the Andersonians clawed back into the game, with a well taken penalty corner by Mohd Razali Mohd Zulkapli to level the score at 2-2 and put both teams on equal terms as they trooped into their dressing rooms.

When play resumed the tired legs of SMK Hamzah were no match for the rejuvenated Anderson Tigers who ran their opponents to the ground by taking the lead in the 48th minute through Mohd Amirul Syafiq. Five minutes later, Mohd Razali came back for his second goal in the match to take the fight out of a spirited team who lacked the much needed exposure of a champion team.

It was the triumph of experience and exposure over raw determination and courage which eventually prevailed. The final score stood at 4-2 in favour of the Andersonians. Apart from winning the championship title for the tenth time, they also won the Fairplay trophy and Mohd Noor Khairul Aziz was voted Man-of-the Match.

With this win, it appears that Anderson School lpoh is THE hockey school in the country, having dominated the championship 10 out of the 17 times since its inception. Rightly the Andersonians have lived up to their school motto,

"TO STRIVE. TO SEEK. TO FIND AND NOT TO YlELD"