To Sir With Love...by Palmini Gunasegaran

Breaking News: Our Cikgu or "Uncle"  and "Auntie" will be in Kuala Lumpur on February 27, 2011 (Sunday) for Lunch at noon at The Orchid, Royal Lake Club, Kuala Lumpur. Be seeing you then!


WHEN top civil servants, politicians, judges, foreign dignitaries, and others take time off to return together to a small town like Ipoh, you sense it must be for an extraordinary event. Then, in a nice surprise, you discover they had made the trip to give a surprise birthday bash for their teacher who was turning 80.

That really is extraordinary. 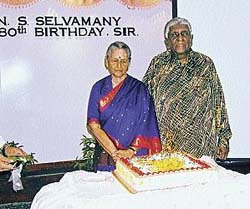 The teacher, or Cikgu they refer to so fondly, is Datuk N.S. Selvamany, who taught them at Anderson School. The fact that they remember their teacher and hold him in affection 30, 40 and 50 years later is remarkable.

Below are excerpts from interviews with some of the ex-students.

Ng Yook Woon, 67, a senior lawyer in Ipoh, who organised this gathering was moved to tears when he explained why Selvamany is so well loved:

“Cikgu was colour-blind; everyone was his child. He was a teacher, father and friend. He taught us human values by living an exemplary life of one who devoted his entire life to selfless service. We were treated as family rather than mere students.
“Till today, we ex-students are part of the family for any celebrations; happy or sad. Where do you see such values now? There is not enough emotional connection with the students, and all problems begin from that. There is very little ‘human to human’ relationship now in schools as teachers just impart knowledge.
“Here was an ordinary school teacher who shaped some of the nation’s top civil servants and who is still respected by all of them.”

Tengku Razaleigh Hamzah, 69, MP of Gua Musang in Kelantan and former Finance Minister, says his love for economics was inculcated by his teacher.
“Datuk Selvamany was my class teacher and also taught me economics. Cikgu taught us practical aspects to economics, and that is the way I have used it even during my tenure as finance minister. How does one ever forget his ‘Law of Diminishing Returns’ which he drummed into us? 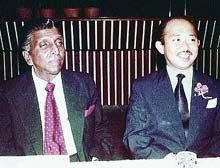 “He was a natural teacher, full of devotion and wisdom. There was no force, threats or use of cane whatsoever; he won the students over with his love, sincerity and genuine concern. He made a man out of you. Cikgu instilled values and moulded some of us (the older generation) to be who we are today.”

Professor Dr. Rokiah Talib, 62, The Professor in Anthropology and Sociology with the University of Malaya was so bubbly that you felt she was talking about her own father.

“Cikgu touched our hearts by creating interest at the interpersonal level; the genuine care and concern came directly from his heart.

“Our success is his success. Similarly, his loss is our loss, too, and we all felt the loss and pain when Cikgu lost his only son in a tragic accident. We truly felt we lost our own son when that happened.

“I know we can never find another teacher like him, and, if I could have one wish, I would clone Datuk Selvamany. If we had more teachers like him around, we would have less disciplinary problems in school.”

“Cikgu was a born teacher. He set high standards in teaching and introduced a new method to teach Economics to the 6th Form class.

“He used the traded tin and rubber prices published in the papers to illustrate his lessons. Economics came to life through this innovation.

“His enthusiasm as a teacher went beyond teaching. He encouraged us to look beyond the classroom.

“In Cikgu’s eyes, we were typical mischievous youths who had to be moulded into well-behaved and responsible adults. He treated us more as friends than as students. Over the years, he has kept in touch with many of us. Today our families are close friends.”

V. Manickam, 56 years old, started off as a lab attendant and retired from Anderson School as a library assistant. He regards Datuk Selvamany as his teacher, father and boss.

“I dropped out of school as I was poor and when I was 17, Datuk employed me as a lab attendant in Anderson School.

“He was not in charge of the labs but he still took an interest in our welfare. He taught me about taking pride in work.

“His love and guidance was so important for a young boy like me, who had no father and came from a gangster-infested slum area.

“If it was not for Datuk, my life would have been a disaster.”


Saturday April 29, 2006
BY PALMINI GUNASEGARAN
As Reported in The Star Online.
Posted by Unknown at 3:59 PM