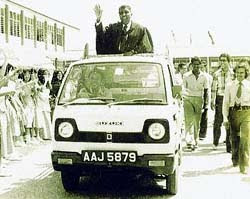 HE was larger than life, a man so true to his profession that he dedicated his life to his students and to teaching, whose kindness knew not race, religion, colour or creed, Datuk N.S. Selvamany, who recently turned 80, was a giant among teachers.

He played hockey with Sultan Azlan Shah in school, had Tun Dr. Mahathir and Mr. S.R. Nathan, the President of Singapore as university mates in Singapore, and, as teacher, he has inspired many a student to success.

He was, to quote Rudyard Kipling, “A man who walked with kings nor lost the common touch.”

Former Finance Minister Tengku Razaleigh said God made limited versions of such great men. Selvamany is a walking history book and a storehouse of knowledge. He may be 80, but he remembers names, facts, figures, dates of incidents with precision. Every word is chosen meticulously to make his point and every card that he sends out is always handwritten.

Selvamany continued to serve on many school boards, voluntary bodies, and NGOs even after retirement.

Selvamany was born in Batu Gajah on Jan 16. His father, a French citizen, from Pondicherry, India spoke French and Thai fluently and was for a time the Acting Consul for France in Bangkok. His maternal grandfather was wealthy and owned vast tracts of land in Batu Gajah back in the 1930s.

“I went to do a BA degree in Raffles College in Singapore and then, on my mum’s insistence, did a diploma in teaching there,” he says.

Later, he was posted to Anderson School as the first economics teacher in Perak. Starting with just four students in the attic of the school, Selvamany went on to become one of the country’s renowned economics teacher. Student came from various states to learn economics in Form 6 from him, since there were few other economics classes elsewhere. Students included Tengku Razaleigh from Kelantan, K.Kesavapany from Pahang, Datuk Seri Azmi Khalid from Perlis, Tengku Datuk Abdul Malek bin Tengku Kassim from Kedah.

“Teaching just came naturally to me. It was a humbling experience as I realised that whatever I learnt in university was insufficient. My students were my best teachers, as their questions ensured that I became better,” Selvamany recalls.

He used unconventional teaching methods, which made economics come to life. “I lived and breathed economics then and it was pure joy everyday,” he says.

According to Selvamany, many students these days don’t even know their teachers’ full names or their headmaster’s. “We had no words like frustration, burnt-out, tuitions, boring, during those days, but today this is the standard vocabulary students have,” he says in a pained voice.

After he retired in 1981, Selvamany continued to serve till today in many school boards, voluntary bodies, and a host of NGOs. “I will never retire till my last breath, as teaching is in my blood.”

His tireless efforts did not go unnoticed; he was awarded the Tokoh Guru Perak in 1996 and Tokoh Guru Malaysia in 1997. The Tokoh Guru of Perak award was specially significant as it was presented to him by then Education Ministry Director-General, Tan Sri Dr.Wan Mohd Zahid, one of his ex-students. He was also awarded the Datukship by Sultan Azlan Shah of Perak.

Selvamany was also the editor of the book Journey of the Andersonians, Who’s Who, listing 1,001 ex-students of Anderson in 2004. This was a labour of love, as getting and compiling information on so many people is not an easy task especially when they are scattered all over the world.

Selvamany pays tribute to Datin Poovayee, his wife of 53 years and a teacher herself, for what he has achieved in life. “It was so helpful that we were on the same mental channels; She is my soul mate.”

The couple were blessed with two daughters and a son. Both daughters are medical specialists in the US. They lost their only son, Kugan, a fledging medical doctor himself, in a tragic accident when they were in their late 60s. The untimely death devastated the parents but they were not alone.

Friends and former students, rich and poor, educated and illiterate, of all races and religion came together to give moral support to the grief-stricken couple. Selvamany and his wife have accepted the death as the will of God and have moved on.

When asked to summarise his life, Selvamany simply says, “We are an ordinary couple who have lived a rich, full life. God has been very kind to us and we are not wanting of anything.”

True to form, these are humble words from a man regarded as an institution in Ipoh and a living monument to all teachers

Article by: Palmini Gunasegaran
Published on April 29, 2006 in The Star
Posted by Unknown at 7:03 PM